What Broadcasters Are Doing

Scripps’ 60 television stations and national media brands, including Newsy and Stitcher, published stories and ran a national advertising campaign focused on the critical need for news literacy and the important role of a free press in a healthy democracy.

TEGNA began training its journalists in mid-January to combat disinformation in partnership with First Draft, a nonprofit that supports journalists, academics and technologists in the digital age. First Draft will train TEGNA’s journalists across the company’s 49 newsrooms to identify false information online.

NBC's 'Meet the Press' Focuses on Key Counties for Election

Hearst Stations to Explore Issues in Every State

Hearst Television, as part of its “Commitment 2020” initiative, is extending its television and digital coverage of the 2020 election season to provide election news coverage that affects every state. Journalists from around the country and at the recently expanded Washington, D.C., bureau will conduct deep reporting on election security and other issues. Hearst is also collaborating with FactCheck.org, a project of the University of Pennsylvania’s Annenberg Public Policy Center, to identify misinformation.

Telemundo and the National Association of Latino Elected and Appointed Officials (NALEO) Educational Fund hosted two phone banks, each open from 7:00 a.m. to 9:30 p.m. On September 17, they focused on citizenship questions and on September 24 addressed voter registration. The campaign is part of “Hazte Contar” (“Be Counted”), Telemundo’s multi-year initiative encouraging participation in the 2020 census and presidential election.

Scripps’ CBS affiliate WTVF Nashville, along with The Tennessean and Belmont University, held a debate for the leading candidates for Nashville mayor on June 25. The debate is part of their commitment to provide voters with critical news and information on the issues impacting Nashville.

NBC’s WCAU-TV and Telemundo’s WWSI-TV Philadelphia hosted and aired a mayoral debate between incumbent Mayor Jim Kenney and Democratic challengers former City Controller Alan Butkovitz and state Sen. Anthony H. Williams on May 13. The first and only televised mayoral debate featuring all Democratic candidates was broadcast in English and Spanish and was livestreamed on all WCAU and WWSI digital platforms.

Tribune-owned WGN-TV Chicago aired a forum featuring Chicago mayoral candidates on January 10. The live hour and a half long prime time event was open to all fifteen candidates. Twelve attended the whole event, one participated in the second half, and two did not participate. WGN made videos available after the event to show where candidates stand on topics including education, crime and budgets.

Send details on your station’s election coverage, debates and get out the vote efforts to Suzie Raven, senior manager, Public Service, at sraven@nab.org. Please include a high-res .jpg photo. Tag @BroadlyServing on Twitter, Facebook and Instagram as well. 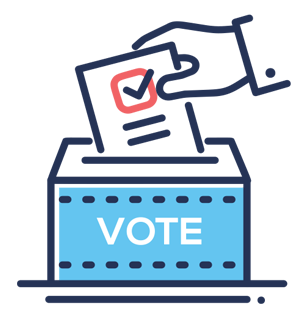