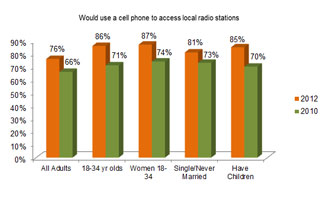 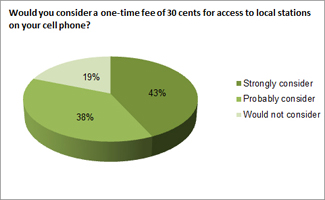 WASHINGTON, DC -- The National Association of Broadcasters today applauded the results of a nationwide poll conducted by Harris Interactive which shows that four out of five Americans who own a cell phone would consider paying a small, one-time only fee to access their favorite local radio stations on a mobile phone. The survey, commissioned by NAB, was conducted online between April 18 and May 1, 2012 among more than 2,000 U.S. adults (age 18+).

"The results of this survey demonstrate again a significant and growing demand for radio-capable cell phones in the U.S.," said NAB Executive Vice President of Communications Dennis Wharton. "We're hopeful that as demand for this capability becomes more apparent, wireless carriers will voluntarily offer this feature or activate radio chips already in their devices. Radio-enabled cellphones are a standard feature in much of Europe and Asia. From a public safety perspective alone, there is a strong case to be made for wireless carriers to also voluntarily activate radio chips in cellphones in the U.S."

Poll results, as released by the National Association of Broadcasters, are available online and include data from a similar poll conducted by Harris August 31 - September 2, 2010 among 2,587 U.S. adults. Poll findings showed:

"Like in 2010, this survey again shows that a strong majority of American cell phone owners would use a radio built into their cell phone," said Regina A. Corso, SVP Harris Poll, Harris Interactive. "Particularly in this day of ever-rising wireless data fees, four in five cell phone owners would pay a small one-time fee to access local radio programming."

The 2012 poll comes on the heels of heightened attention among policymakers who have indicated an interest in exploring the merits of equipping mobile devices with FM receivers. Last month, Rep. Gus Bilirakis (R-Fla.), who chairs the House Subcommittee on Emergency Preparedness, Response and Communications, held a "roundtable" on Capitol Hill with members of the broadcast, cable and wireless industries to discuss how to work together to enhance the current system of alerting and informing the maximum amount of citizens in times of crisis.

Following a rash of severe weather and tornado outbreaks last summer, former FCC Commissioner Michael Copps said, "We share a duty to think creatively about how we can arm consumers with additional ways to communicate during disasters... I think the time is here for a thorough, calm and reasoned discussion about FM chips in handsets." In February, several members of the Congressional Black Caucus also called on the FCC to hold a hearing to explore the benefits of including radio tuners in mobile phones. NAB has noted that U.S. wireless carriers seem to prefer offering consumers exclusive bandwidth-consuming contracts with expensive streaming applications and data plans, as opposed to a broadcast radio alternative requiring only a minimal one-time fee. Indeed, even many so-called "free apps," require the use of data to operate on mobile devices. NAB has also pointed out the tendency for cell phone signals to jam during power outages and incidences of severe weather, while it is the robust 'one-to-many' transmission architecture of local broadcasting that keeps listeners and viewers in touch and informed. Broadcasters are also moving forward with advanced technologies to support the integration of radio chips in mobile devices. At the NAB Show in Las Vegas in April, Emmis Interactive, iBiquity Digital Corporation and Intel announced that they have developed a new energy efficient, affordable, high-processing HD chipset with financial support from NAB Labs. The new technology offers song tagging features and delivers an enhanced HD Radio ad experience, leveraging the power of the HD Radio data capability with a smartphone's data channel to deliver a truly interactive advertising experience.