WASHINGTON - The NAB Show, the premiere event in the world of electronic media for more than 80 years, will enhance its focus on the content community within the media marketplace, show organizers from the National Association of Broadcasters announced today.

Scheduled speakers at this year's show will include iconic author Alvin Toffler, whose book Future Shock has sold more than six million copies and accurately forecast the disruptive influence on global economics by transformative information and content delivery technologies.

Given that NAB Show attendees represent every stage of the content life cycle, including creation, management, commerce, distribution and consumption, this year's show will feature a content theater, two pavilions dedicated to IPTV and mobile solutions, and a commerce area to facilitate content partnership opportunities. The content theater will feature high-level Q&A sessions, keynote speeches and panel discussions to be presented alongside segment screenings of recent, cutting-edge films.

"By spotlighting the content community, the NAB Show will remain the dominant event for the future of content creation, management and delivery," said NAB Executive Vice President of Conventions and Business Operations Chris Brown. "Whether it is broadcast TV and radio, the Internet, satellite, IPTV or the next yet-invented handheld device, it is content that serves as the unifying driver of entertainment and innovation." 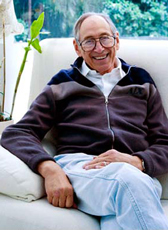 Toffler, whose other best-selling books include The Third Wave and Revolutionary Wealth, will be speaking at an event open to all NAB Show attendees. He and his spouse, Heidi -- a co-author of many of his books -- have been called by Time magazine "the standard by which all subsequent would-be futurists have been measured." Toffler has been a visiting professor at Cornell University, a faculty member at the New School for Social Research, and an editor at Fortune magazine.