Pittman to Speak During the NAB Show Radio Luncheon 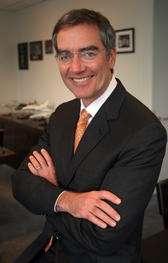 "We are extremely pleased to welcome Bob Pittman to the NAB Show," said NAB Executive Vice President of Radio John David. "His extensive background and diverse media experience will provide attendees with an in-depth look at the opportunities for the radio business."

Pittman led the programming content team that created the MTV cable network and helped launch the music video industry. As CEO of MTV Networks, Pittman oversaw the growth of MTV and the expansion of the company into international markets. It was during this time that MTV Networks became the first profitable cable network group, a status that was held throughout Pittman's tenure at MTV.

In 2003, Pittman founded Pilot Group LLC, a consumer brand-focused, private investment firm based in New York. The company's investments include Double O Radio, a privately-held corporation with radio stations in several states, including New York, South Carolina, Florida, Texas and Missouri. Pilot Group also has investments in broadcast TV, various Internet products and services, a research company, and a specialty retail chain. Prior to Pilot Group, Pittman served as Co-COO of AOL Time Warner, president and chief operating officer of America Online, Inc. and President and CEO of Time Warner Enterprises. He began his career in radio at age 15, when he worked as an announcer at a Mississippi station. Pittman moved on to successfully program radio stations in Pittsburgh, Chicago, and WNBC in New York City, NBC Radio's flagship station.

Pittman has been recognized as one of the "Five Original Thinkers of the 80's" by Life Magazine, and has been inducted into the Broadcasting and Cable Hall of Fame. In 2002, Pittman received the International Radio and Television Society's Gold Medal.

The Radio Luncheon will feature the annual presentation of the prestigious NAB Crystal Radio Awards. As previously announced, legendary radio disc jockey Larry Lujack will be inducted into the NAB Broadcasting Hall of Fame.