--Past MRC chairman, COLRAM member to be honored at NAB2007--

WASHINGTON, DC - The National Association of Broadcasters and the Broadcast Education Association will award the 2007 Hugh Malcolm Beville, Jr. Award to Dr. Thomas Evans, senior vice president of research for ABC Radio Networks. The Beville Award, which recognizes the memory and life's work of broadcast research pioneer Mal Beville, is presented annually in honor of outstanding contributions to the field of broadcast audience research. Evans will receive this year's Beville Award on Thursday, April 19 during NAB2007 and BEA2007 in Las Vegas.

"Dr. Tom is one of the most respected and dedicated professionals in the business. We are proud to honor him for his great contributions to improving the quality of broadcast audience research," said NAB Vice President of Research and Information David Gunzerath. 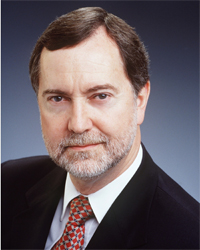 Evans is the senior vice president of research for ABC Radio Networks, overseeing all research activities and working closely with ABC Radio executives on research related issues for over 70 ABC-owned radio stations.

Having served on numerous industry research boards and committees, Evans is the immediate past chairman of the Media Rating Council, and is the current chairman of the Audio Council of the Advertising Research Foundation, where he serves on the ARF Board of Directors. He is also a member of the NAB Committee on Local Radio Audience Measurement and the Research Committee of the Radio Ad Effectiveness Lab, among others. Previously, Evans chaired the Network Radio Research Council, the New York Radio & TV Research Committee and the RAB GOALS Committee.

A veteran of the industry, Evans' career has included stints at the Southwest Center for Urban Research, the Institute of Urban Studies, NBC, Westwood One, Arbitron and Nielsen Media Research.

About BEA
The Broadcast Education Association is the international higher education association for professors, students and professionals involved in the teaching and research related to radio, television and electronic media. For over 51 years, BEA has served as the critical link between the professors who teach tomorrow's radio and television employees and the professionals working in the broadcast industry. Information about BEA can be found at www.beaweb.org.