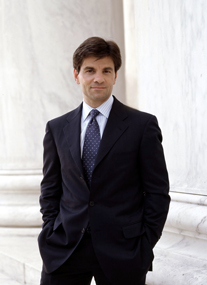 The NAB State Leadership Conference, held February 27 - March 1 in Washington, DC, will gather hundreds of local radio and television broadcasters from across the nation to discuss legislative and regulatory issues important to broadcasting. The conference also provides each delegation the opportunity to educate Washington policymakers on broadcasters' commitment to community service and the economic and political realities of providing that critical service. Stephanopoulos will share his experiences with attendees and offer his insights on the current environment in Washington and how it may impact local broadcasters.

"As a veteran of Washington and an ambassador of broadcast television, Mr. Stephanopoulos brings a unique perspective to the NAB State Leadership Conference," said NAB President and CEO David K. Rehr.

In his role as anchor of This Week, Stephanopoulos has interviewed every key member of the Bush administration, including President Bush, Vice President Cheney, Secretary of State Condoleezza Rice and former Defense Secretary Donald Rumsfeld. He has interviewed numerous foreign leaders, members of Congress, Supreme Court Justices and political leaders from the state and local level.

Stephanopoulos began anchoring This Week in 2002 and was named chief Washington correspondent in December 2005. Previously, he was an ABC News correspondent, reporting on a wide variety of political, domestic and international stories for various ABC News programs. He joined ABC News in 1997 as a news analyst for This Week.

Prior to joining ABC News, Stephanopoulos served in the Clinton administration as the senior advisor to the president for policy and strategy. He is the author of All Too Human, a number one New York Times best-seller on President Clinton's first term and the 1992 and 1996 Clinton/Gore campaigns.