Print Ad Gallery
Click the images below to view and download high-resolution PDF advertisements. These ads can be used by stations to help advocate this issue on their websites or other forums. 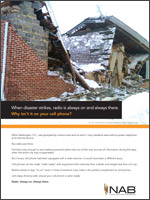 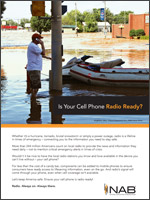 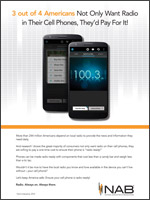 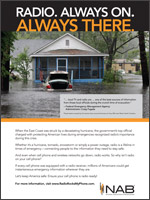 Myth #1: There is no consumer demand for radio.

Fact: A recent survey found that 81 percent of Americans not only want free, local radio as a feature, but would be willing to pay a small one-time fee to get it, citing its importance during emergencies.

Fact: Radio has no significant impact on battery life. A typical cell phone with a radio receiver could provide the user with more than a full day's worth of radio listening on a single battery charge. Since most people charge their phones daily or every other day, a radio chip would have little to no effect on battery life.

Myth #3: Integrating radio into cell phones is a costly additional expense for manufacturers.

Fact: The reality is the cost to the manufacturers would be very low. When mass produced, radio chips can be integrated into cell phones for pocket change. In fact, four out of five cell phone owners say they would consider paying the one time cost of enabling a phone with a radio receiver – that's how much they want local radio.

Myth #4: Critics argue that the size and weight of a chip would be too big and heavy for consumers.

Fact: No one wants to bulk up their cell phone, even though we want more options and features. So luckily for cell phone users, a radio chip is smaller than the head of a nail and weighs less than a Tic Tac.

Be sure to share these realities, and correct any false information that you hear.

» In Times of Crisis, Local Radio is There (PDF)

MORE ABOUT THIS ISSUE