The intent of a dashboard audit is to determine how radio stations are presented in cars with HD Radio receivers as well as in cars that have analog receivers with Radio Data System (RDS) capability. Because so much broadcast listening takes place in cars, and because automotive is radio’s #1 revenue category, the goal is for every radio station in markets big and small to present well in cars.

In the dashboard audits commissioned by NAB and described in the Digital Dashboard Best Practices Report , the overall user experience was found to be very inconsistent. This led to the conclusion that in many cases, radio station content strategies for automotive displays were designed many years ago, with little or no updating, and without knowledge of the capabilities of modern digital dashboard displays.

With the growing number of options for audio content in cars, it’s more important than ever for the radio industry as a whole to be presented in a consistent fashion on the dashboard, providing a better user experience. As listeners scan across the radio dial, it is important that most, or ideally all stations look good and provide the information (typically called “metadata”) that consumers have come to expect. When only a handful of stations are populating song title and artist information, or on HD Radio receivers, are scarcely providing “Artist Experience” images, the local radio experience is left lacking.

This web page is designed to provide “how-to” information for radio stations to conduct a dashboard audit, including a consistent scoring system to measure a station’s performance and to provide a benchmark that can help establish whether the goals for improving the dashboard experience are met.

Note that the focus here is on FM-band reception since analog AM radio receivers do not have metadata capabilities, however, AM stations broadcasting an HD Radio signal should consider carefully the information on this web page since all HD Radio signals, both AM and FM, can transmit metadata. Perhaps more importantly, AM stations that are broadcasting on FM translators need to realize that FM translators do support metadata transmission and consequently these AM stations should be upgrading their facilities to provide for such transmission.

The dashboard audits should be conducted on a typical weekday. It is recommended that audits be conducted during two different dayparts, one during morning drivetime, and one during either midday hours or the afternoon drive daypart.

Two cars are required for the audits: one with an HD Radio with Artist Experience receiver (displays album art and other graphics), and one with an RDS receiver (no HD Radio). Both vehicles should be recent model-year vehicles (no more than 1 or 2 years old) so that the most up-to-date listener experience is obtained. There are two stages for each audit: 1) in the vehicle, video and audio recordings of the dashboard display are captured across the radio dial, and 2) back at the studio, these recordings are carefully analyzed and the results are entered into an Excel spreadsheet for discussion and further analysis. Click here to download a spreadsheet set up for doing a Dashboard audit.

The in-vehicle portion of the audits are conducted with the vehicles parked and stationary, at a location central to the radio market with good reception of the stations in the market. For each vehicle, ideally two people (for example, an engineer and a program director) should work together to capture the video and audio recordings, with one person operating the recording equipment and the other person taking note. If possible, the audits should be conducted using both vehicles simultaneously, parked next to one another with each set of operators conducting the audit in their vehicle at the same time. If only two operators are available, then the audits can be conducted consecutively, first in one vehicle and then the other. Alternatively, if the RDS-equipped and HD Radio-equipped vehicles are operated on different days, the audits should still be done from the exact same location and during the same time of day.

Here are some excerpts from dashboard audit videos which NAB created when conducting a dashboard audit in Charlotte, NC (one of the three test markets) which serve as examples. The first excerpt is a video of the HD Radio receiver and the second is the RDS receiver.

During the audit, the operators are charged with capturing on video (and with audio) how each radio station is displayed on the dashboard, allotting sufficient time for each station’s metadata to populate (includes album art in HD Radio receivers, text, etc.). For the vehicle with the HD Radio receiver, this may require as long as 60 to 90 seconds per station (to allow the “Artist Experience” information to populate).

The audits require a video camera or smartphone to capture a video and audio recording of the appearance of the dashboard display as well as the radio receiver audio. This video and audio capture is analyzed back at the station, used to obtain the information which is entered into the Excel spreadsheet audit form (discussed below) which facilitates analysis of the information and makes it possible to share the results with other stakeholders in the station, cluster, or company.

An effective audit captures all of the radio stations in the market, from one end of the radio dial to the other. This provides the benefit of establishing context for a market standard. Once a dashboard display populates (and sufficient time elapses, at least 60 to 90 seconds for the Artist Experience artwork to appear), the auditors should switch the receiver to the next available FM station using the “seek” button.

When conducting the audit in the HD Radio-equipped vehicle, multicast (i.e., HD2 and HD3) channels should be included.

A scoring system for rating each station captured on the audio and video recordings has been created, using an Excel spreadsheet to organize and evaluate all key aspects of the way each station is displayed on the dashboard. The spreadsheet contains multiple tabs for multiple daypart audits for both RDS and HD Radio equipped vehicles, an example is shown here:

On the far left-hand side of the spreadsheet is a column to provide an overall quality rating for each station. Ratings should be given after all of the stations in the market have been audited and analyzed. The scoring system contains four grades:

The spreadsheet has ten main fields to be filled out for each station:

By the very nature of these audits, different conditions, equipment of the cars utilized, and other vagaries relating to the ways radio stations deliver metadata content to these dashboard displays necessitates a degree of subjectivity in the scoring system. It is recommended that the same people are utilized for each audit to retain a level of consistency. Note, however, that judgement calls will be made throughout the process.

These audits are less about pinpoint accuracy in assigning colors and grades, and more about gaining a deeper understanding of the state of the market in dashboard displays in general, and how radio stations look in vehicles with both types of receivers (HD Radio and RDS), specifically.

For example, there are two types of RDS systems – basic (using just “Program Service”) and advanced (using “Radio Text”). It is recommended that audits be conducted in a vehicle with the advanced system (this will likely be the case if a current vehicle, no more than 1 or 2 years old, is used).

Basic RDS receivers only display the 8-character Program Service (PS) field. The PS field can accommodate more than 8 character messages by ”scrolling” or “chunking” text fields and this is how many stations display song title and artist on basic RDS receivers. However, our Best Practices report suggests this field should be limited to station identification information (call letters, frequency), rather than scrolling or chunking wordier artist and song title information, which tends to provide a sub-optimal user experience.

Advanced RDS systems feature two text fields, the aforementioned PS field and the Radio Text (RT) field. The RT field can display up to 64 characters and this is where longer-form information such as artist and song title or program names are better displayed.

When observing in vehicles with the HD Radio receivers with Artist Experience,, another area to focus on includes the accuracy and quality of the album art. In some cases, generic artwork appears in place of the actual album. The Format ID (“Rock,” “Sports,” etc.) is another area where stations often misfire.

Multicast (i.e., HD2 and HD3) stations should include clear format identification (logo, format title) to differentiate them from their HD1 parent.

In both RDS and HD Radio-equipped vehicles, pay attention to the use of case consistency (upper and lower cases). To ensure consistency, stations should only capitalize the first letter of proper nouns and not capitalize entire words.

Additional areas to pay attention to include consistency in the way artist names are displayed (first name/last name) and “stray” data that might appear in log notes (for example, “edited version” or “clean version”) but should not be displayed on the screen.

In all cases, text information on dashboard displays should reflect real-time content. Commercial text and sponsor mentions during programs is discouraged and another reason to downgrade a station display rating in the station audit.

At the end of the audit process, the auditors should review each individual station, assigning a corresponding color grade to each based on the station’s overall performance. Missing data, clunky execution, poor or no album art, underutilization of the technology are all common problems that will likely rise to the surface. Again, the audit is less about exactness, and more about identifying problems and working together to create a user-friendly dashboard interface on both RDS and HD Radio interfaces.

Refer to the Best Practices report for a full list of recommendations.

For questions or comments on the dashboard do-it-yourself audit please contact David Layer at NAB, dlayer@nab.org.

To conduct a dashboard audit using the scoring system described on this page, download the Excel spreadsheet. 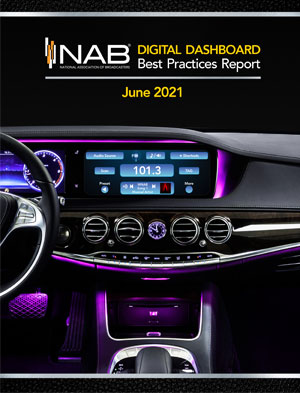 
For questions or comments on the dashboard do-it-yourself audit please contact David Layer at NAB, dlayer@nab.org.