WASHINGTON, D.C. -- NAB President and CEO Gordon Smith testified today before the House Subcommittee on Communications, Technology and the Internet. The subcommittee hearing focuses on spectrum and broadband policies. Below are his remarks. 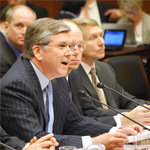 Good morning, Chairman Boucher, Ranking Member Stearns and members of the committee. I appreciate the opportunity to be with you this morning and I would like to share a few thoughts as the committee reviews spectrum and broadband policies.

First, NAB believes that any inventory of spectrum should be comprehensive. Let's look at all bands and all services, including Federal government bands. And let's view how each service is using its existing spectrum.

Second, our national priorities should recognize the value that free over-the-air broadcasting brings to every American. Broadcasting and broadband are not "either/or" propositions as some have suggested; that's a false choice.

Third, we should challenge all services to be efficient and innovative users of spectrum.

Through our recent transition to digital, broadcasting has become more efficient. With your help, the transition was a resounding success, and the benefits are remarkable. In a digital world, viewers receive many new programming streams and a wide variety of content and local news in high definition. It would be shortsighted to stunt that growth and dampen what is an even brighter future for broadcasting.

If broadcasting is limited or eliminated, consumer investment and expectations in DTV would be stranded. Consumers spent an estimated $25 billion on HDTV receivers in 2009 alone. Millions of other Americans invested time, effort and funds on converter boxes. And, the US government spent some $2 billion to help them, while broadcasters spent more than $10 billion.

For years consumers have been promised that the digital upgrade would usher in a new era of high-quality television with new and more diverse programming, more channels and a host of new services free, over-the-air. If some advocates have their way, consumers would realize none of these benefits.

Through the DTV transition, broadcasters gave back 108 megahertz of spectrum. Broadcast television is the first wireless service ever to substantially reduce its spectrum use while providing additional services.

Then there is mobile DTV. This year, the television industry adopted a new mobile digital television standard, turning on the green light for manufacturing and implementation. And the results are nothing short of stunning.

This is a mobile television, which is currently receiving live local programming. Seven television stations in the Washington, DC area are currently broadcasting mobile DTV. 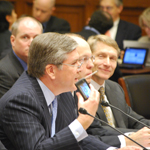 This device is also a mobile phone.

And this combination of technologies is, I believe, the future of mobile wireless communications. It is not an exaggeration to say that you will soon be able to receive broadcast television signals on almost any deviceâcell phones, laptopsâyou name it.

Broadcasting's ability to serve "one-to-many" in small bandwidth segments realizes tremendous efficiencies that cannot be achieved by any other service. At moments of national significance or tragedy, when millions of Americans are seeking information, broadcasting is the most efficient delivery system. With each additional viewer, a broadcaster's use of spectrum becomes more efficient, without any additional burden on the spectrum. By contrast, with wireless broadband, each stream of content to every individual places an additional strain on the wireless network, clogging up more bandwidth.

And there's more. For example, a company called Sezmi is working with broadcasters to provide a blended broadcast-broadband system that is a more affordable, quality alternative to cable and satellite.

A comprehensive, objective examination of spectrum allocation and usage is a worthwhile endeavor. Such an analysis â if done forthrightly and without bias â will demonstrate that broadcasters continue to be effective custodians of our nationâs airwaves.

Many broadcast services have not been, and cannot be, efficiently replicated by broadband services. Broadcasters, for example, help to save lives through timely coverage of natural disasters and other emergencies. And by coordinating with local law enforcement via Amber Alerts, broadcaster have participated in the recovery of 492 abducted children.

Let's not forget the concerns we all shared during the DTV transition. If free, over-the-air broadcast service is no longer available, millions of Americans, particularly those who are economically disadvantaged, elderly, and racial/ethnic minorities, would be left without access to critical news and emergency information.

Spectrum policy has often emphasized the need to make sure spectrum is put to its "highest and best use." I submit that there are no higher or better uses of spectrum than the broadcast services when all these public values are included in the calculation.

Thank you again for having me here today. I look forward to working with you.


About NAB
The National Association of Broadcasters is the premier advocacy association for America's broadcasters. NAB advances radio and television interests in legislative, regulatory and public affairs. Through advocacy, education and innovation, NAB enables broadcasters to best serve their communities, strengthen their businesses and seize new opportunities in the digital age. Learn more at www.nab.org.