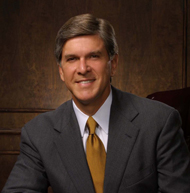 WASHINGTON, DC -- Gordon H. Smith, of Covington & Burling LLP, a former two-term U.S. Senator from Oregon and successful entrepreneur before launching his career in politics, has been selected as the new president and CEO of the National Association of Broadcasters.

The 57-year-old Smith served in the U.S. Senate from 1996 to 2008, where his committee assignments included the Senate Commerce Committee, the panel that oversees all broadcast-related legislation. Smith also served on the Senate Energy and Natural Resources Committee, the Senate Finance Committee, and the Senate Foreign Relations Committee. He has been widely respected as a pragmatic lawmaker able to successfully reach across party lines. Smith's role on the Commerce Committee and as the Chairman of a Senate High Tech Task Force helped foster his interest in new media and new technology issues.

"I am honored to have been selected as NAB's new president and consider this an opportunity of a lifetime," said Smith. "As radio and television stations embrace new technologies and new business opportunities, I look forward to articulating to public policymakers the unique and positive role played by local and network broadcasters in the fabric of American society."

"We conducted an exhaustive search to identify the very best individual to lead a great trade association," said NAB Joint Board Chairman Steve Newberry. "We're convinced we have found that person in Gordon Smith. His background as a lawyer, a statesman, and as an entrepreneur -- coupled with his extensive knowledge of broadcast issues from having served many years on the Commerce Committee -- make Gordon eminently qualified to represent the interests of free and local broadcasters in Washington."

Born in Pendleton, Oregon, Smith attended college at Brigham Young University, received his law degree from Southwestern University School of Law in Los Angeles, and practiced law in New Mexico and Arizona before returning to Oregon to direct the family-owned Smith Frozen Foods business in Weston, Oregon. Smith Frozen Foods is now a $50-million-a-year enterprise, and one of the largest frozen foods companies in America. Before serving in the U.S. Senate, Smith was elected to the Oregon State Senate, rising to the position of president of that body after only three years.

Smith and his wife Sharon are the parents of two children and have one grandchild.