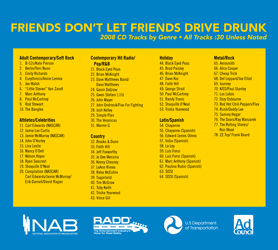 Designed to target 21- to 34-year-olds, the critical audience that represents over half of all alcohol-related fatalities, the PSAs feature a variety of celebrity entertainers categorized according to radio station format and the recording artists' primary genre. Available in both English and Spanish, the CD contains PSAs that can be aired year-round as well as holiday-specific PSAs.

In addition to distribution at The NAB Radio Show, CDs will be mailed to stations later this month. PSAs can also be downloaded online at www.nabspotcenter.org.

About RADD
RADD, The Entertainment Industry's Voice for Road Safety, is an internationally recognized non-profit organization that empowers celebrities and media partners to create positive attitudes about road safety. Founded in 1986, RADD advocates the use of designated drivers, seatbelts and safe driving through control behind the wheel, making responsible behavior the norm. RADD's messages are non-judgmental, hip and positive. RADD is a proud two-time recipient of the US Department of Transportation's prestigious Public Service Award.

About Ad Council
The Ad Council is a private, non-profit organization that marshals talent from the advertising and communications industries, the facilities of the media, and the resources of the business and non-profit communities to produce, distribute and promote public service campaigns on behalf of non-profit organizations and government agencies in issue areas such as improving the quality of life for children, preventive health, education, community well-being, environmental preservation and strengthening families.