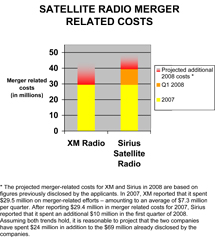 Click the image for a PDF version of this graph

WASHINGTON, DC â XM and Sirius Satellite Radio have spent at least $69 million dollars seeking government approval of their proposed merger-to-monopoly, according to public filings submitted to the Securities and Exchange Commission.

NAB Executive Vice President Dennis Wharton said, "Given the satcasters' exorbitant spending reported so far, it is well within reason to assume their combined merger-related expenses are approaching 100 million dollars."

According to the companies' SEC filings, the figures breakdown as follows: