Bush joined Access Hollywood in 2001 as the East Coast correspondent before moving up to co-anchor in 2004. In addition to his duties at Access Hollywood, Bush hosts The Billy Bush Show, a Westwood One radio program that combines entertainment news with hit music. Launched in 2008, the evening radio show features interaction with callers across America as Bush delivers his unique take on the latest celebrity news. 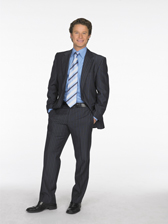 Bush has reported for NBC at the 2004 Summer Olympics in Greece, the 2006 Winter Olympics in Torino, and is scheduled to cover the 2008 Summer Olympics in Beijing. He has also covered numerous red carpet events, ranging from the Golden Globes and Grammys to hosting ABC's live pre-show for the 2004-2006 Academy Awards and the 2006 Emmy Red Carpet Special.

Bush began his career hosting the afternoon drive show on WLKZ-FM in New Hampshire, later moving to Washington, D.C. where he hosted the midday show on WARW-FM. In 1997, he became the host of Billy Bush and the Bush League Morning Show, which aired until 2001. Prior to joining Access Hollywood, Bush was a correspondent for WNBC-TV's "Today in New York" morning show.

About the NAB Radio Show
The NAB Radio Show is the largest annual convention for radio. This year's show, Sep. 17- 19 in Austin, delivers a one-of-a-kind networking opportunity for station professionals representing all format and market sizes and is co-located with the R&R Convention. More information about The NAB Radio Show is available at www.nabradioshow.com.