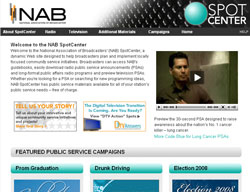 LAS VEGAS -- NAB announced today the debut of NAB Spot Center, a Web site designed to help broadcasters plan and implement locally-focused community service initiatives. NAB Show attendees will have the opportunity to view the Web site at the Public Service Pavilion for the duration of the NAB Show in Las Vegas.

"Throughout history, radio and television stations have proven to be a valuable partner in a wide array of initiatives aimed at bettering America and our local communities," said NAB President and CEO David K. Rehr. "This new Web site underscores our unrelenting commitment to serving the public interest, convenience and necessity."

A variety of public service resources provided on the Web site allows stations to focus on issues specific to their community. Materials available on the site include: