WASHINGTON, DC --A clear majority of Americans oppose legislation backed by the Recording Industry Association of America (RIAA) that would force local radio stations to pay an additional fee for every song aired free to listeners, according to a poll released today by the National Association of Broadcasters. The poll reveals that 75 percent of participants do not support a performance fee levied on radio stations, and 85 percent recognize the promotional value radio airplay brings to artists and their music.

The poll comes as Congressional opposition continues to grow. Sen. James Inhofe (OK), has become the most recent lawmaker to express opposition to the record label-backed legislation. Currently, a bipartisan group of 251 House lawmakers and 26 U.S. Senators oppose a performance tax on local radio stations. 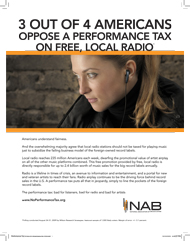 The poll, conducted August 24-31, 2009, randomly surveyed 1,000 likely voters nationwide to examine America's attitude toward the performance tax debate. Participants were questioned on their knowledge of the proposed legislation, and were given additional information about the issue from a May 6 article published by The Wall Street Journal.

The referenced Wall Street Journal article stated that the legislation "would force radio companies to pay royalties [fees] of as much as $500 million a year to record labels and artists whose music they play." The article went on to say that "any additional expenses could send [radio companies] one step closer to financial restructuring." After being provided with these excerpts, poll participants were asked whether they would "favor or oppose the performance fee, requiring local radio stations to pay a fee for every song they play". Results showed that 60 percent "definitely opposed," 12 percent "probably opposed" and 3 percent "leaned opposed."

As part of the survey, 85 percent of those polled agreed with the statement that read, "Songs played on the radio help drive music sales, generating record sales annually for performers." Results here showed that 64 percent "strongly agreed" and 21 percent "somewhat agreed" with the statement.

Commenting on the study NAB Executive Vice President Dennis Wharton said, "This survey demonstrates that the more Americans know about a proposed performance tax, the more likely they are to oppose it. Simply put, a performance tax is bad for free, local radio. It's bad for radio's 235 million weekly listeners. And it's bad for the legions of new and legacy artists whose careers were launched and nurtured by free radio airplay."

The survey, commissioned by NAB, was conducted by Wilson Research Strategies, a Washington, DC-based firm.

"Americans understand fairness. And the overwhelming majority agree that local radio stations should not be taxed for playing music just to subsidize the failing business model of the foreign-owned record labels," reads the print advertisement.

Countering the RIAA-backed legislation is the Local Radio Freedom Act, which opposes "any new performance fee, tax, royalty, or other charge" on local radio stations. The Local Radio Freedom Act, unveiled at a February Capitol Hill event hosted by the Free Radio Alliance, was introduced by Reps. Gene Green (TX-29) and Mike Conaway (TX-11) in the House and by Sens. Blanche Lincoln (AR) and John Barrasso (WY) in the Senate.

To date, a bipartisan group of 251 House members and 26 Senators support the Local Radio Freedom Act. The House cosponsors are: