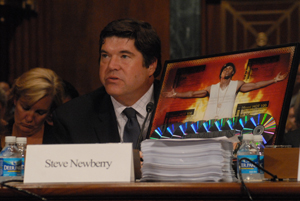 WASHINGTON, DC -- NAB Joint Board Chair Steve Newberry, president and CEO of Kentucky- based Commonwealth Broadcasting Corporation, delivered the following oral testimony today before the United States Senate Committee On The Judiciary. The hearing was entitled "The Performance Rights Act and Parity among Music Delivery Platforms."

Following is a transcript of Newberry's oral testimony as prepared:

Good afternoon, Senator Feinstein, Ranking member Sessions and members of the Committee. My name is Steve Newberry and I am President and CEO of Commonwealth Broadcasting Corporation which operates 23 stations in Kentucky. I am testifying today on behalf of the over 6,800 local radio members of the National Association of Broadcasters of which I am the Joint Board Chair.

It will be no surprise to anyone in this room when I say that radio stations across the country oppose the performance fee legislation we are considering here today. I believe this legislation will upend local radio broadcasting as you have always known it.

I have been a part of the radio industry for over 30 years and I can honestly tell you that I have never seen the economic pain the radio industry is currently experiencing. And as challenging as radio's current economic landscape is, it will deteriorate even further if a performance fee were to be enacted. Already this year, publicly traded companies are reporting revenues down 24 percent, 20 percent, 24 percent and 25 percent.

But beyond radio's economic landscape, we strongly believe that local radio stations provide compensation to record labels and artists today. The artist is "paid" with free advertising and free exposure every time a radio station plays their music. Local free radio is the unique developer, exposer, promoter, and great populizer of new and old music, to multiple new and old generations of listeners.

There is a value to free radio promotion, but how do we quantify it? Economist James Dertouzos determined that radio airplay was directly responsible for up to $2.4 billion a year in music sales. And that figure doesn't include the additional billions earned annually in concert or merchandise sales from radio promotions, artist interviews, and CD and concert ticket giveaways.

Additionally, every day, radio stations are flooded with calls, emails, texts, and visits from record label promoters trying to get a song on the radio or increase the rate of spins or plays. One station in Salt Lake City actually kept track of the number of calls and emails received from record labels between August 1, 2008 and July 14 of this year. This one radio station received 9,597 emails and 755 calls over the course of nearly a year. That's a total of 10,352 contacts that averages to 28 contacts a day, seven days a week. And again, this is just one station in Salt Lake City, Utah.

Free radio airplay is important enough for record labels to send gold and platinum records like this one here to radio stations all over the country. This plaque was presented to radio station "WIHT to commemorate RIAA certified multi-platinum sales of more than 9,000,000 copies ofâ¦Confessions," Usher's 2004 release.

And finally, getting artists airplay on local radio is apparently valuable enough that record labels continue to spend thousands of dollars inviting radio program directors to hear private "showcase concerts" by recording artists. I ask that this stack of email invitations be included as part of the record. These private concerts offer a real glimpse into how much record labels need radio airplay.

It's true, radio competes with other listening platforms, but this competition has not diminished the extraordinary value of radio. Satellite radio has 18.6 million subscribers, and Internet radio has approximately 42 million listeners. But these numbers are dwarfed by the 235 million listeners over the air radio has every week. Radio is the number one way to expose, promote, and get music into the lives of the listeners who fund the recording industry through sales of music, concert tickets and merchandise.

At the end of the day, no one has been able to prove that the value of the music is always worth more than the value of radio's promotion. None of the witnesses here today can tell you that, and before this Committee passes legislation that will have a devastating impact on the radio industry, it seems to me that we should know the answer to that question.

Competing resolutions opposing a new performance fee in the House and Senate have garnered significant Congressional support. S. Con. Res. 14, introduced by Senators Lincoln and Barrasso, has collected 23 bipartisan cosponsors, and H. Con. Res. 49 in the House has 246 cosponsors, well over a majority of the House.

Thank you for inviting local radio to tell our story. We are part of the engine that drives our economy. We are free, we are local, we are community-based, and we are fighting to stay afloat in this tough economy.

Thank you and I am happy to answer any questions.