"Today's vote comes as a complete non-surprise, given the House IP Subcommittee's history of support for the RIAA-backed tax on local radio stations. Despite today's action, there remains broad bipartisan resistance to the RIAA tax from members of Congress who question whether a punitive fee on America's hometown radio stations should be used to bail out the failing business model of foreign-owned record labels." 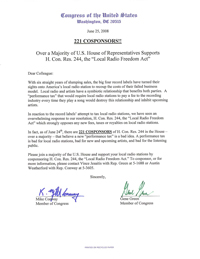 Yesterday, Reps. Gene Green (D-TX) and Mike Conaway (R-TX) circulated a letter to colleagues noting the momentum for the Local Radio Freedom Act, which staunchly opposes a performance tax. The letter, which urges additional support for the resolution, cites the official co-sponsor count according to the Library of Congress, 221, a figure that includes 219 active members of House of Representatives (Reps. Roger Wicker and Al Wynn no longer serve in the House).

A companion resolution, S. Con. Res. 82, has been introduced in the Senate and is supported by 13 senators.