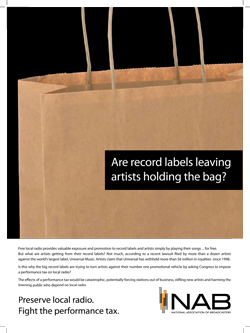 The advertisement, which reads, "Are record labels leaving artists holding the bag?" points out the ironic move by RIAA to parade artists through Congress in support of 'fairness', while one of their largest members faces litigation for allegedly 'cheating' artists like Count Basie and Benny Goodman out of royalties.

The RIAA-backed bill would require America's hometown broadcasters to compensate the foreign-owned record labels for radio airplay of music. The House version of the bill was introduced by Reps. Howard Berman (D-CA) and Darrell Issa (R-CA). Companion legislation has been offered in the Senate by Sens. Patrick Leahy (D-VT) and Orrin Hatch (R-UT).

Conversely, the Local Radio Freedom Act, introduced in late October by Reps. Gene Green (D-TX) and Mike Conaway (R-TX), now has the support of 150 members of the House of Representatives.

The number of lawmakers now opposing a performance fee, tax, royalty, or other charge on local radio for music airplay totals 150, and includes:

On numerous occasions, both record label executives and artists have recognized the promotional value of free radio airplay. Such statements include:

"I have to thank... every DJ, every radio guy, every promotions guy, everybody who ever put up a poster for me and spread the word."

"[R]adio remains the best way to get new music into the listeners' lives."

"[R]adio is the conduit to the people, the voice of the format and the lifestyle's soundtrack."

"Obviously, radio is probably the most important thing for a new rock band coming out. If you don't get yourself on the radio, then you won't draw bodies at the clubs and you won't sell records."

"Country radio, thank you so much for being our mouthpiece. You know what we do means nothing if it never gets played, and no one gets to hear it."

"I can't even believe that this is real... I want to thank country radio. I'll never forget the chance you took on me."

"I have yet to see the big reaction you want to see to a hit until it goes on the radio. I'm a big, big fan of radio."

"Radio has proven itself time and time again to be the biggest vehicle to expose new music."

"It is clearly the number one way that we're getting our music exposed. Nothing else affects retail sales the way terrestrial radio does."

"That's the most important thing for a label, getting your records played."

"Air play is king. They play the record, it sells. If they don't, it's dead in the water."

"I am so grateful to radio. Their support has truly changed my life, and I hope they know how appreciative I am for that."