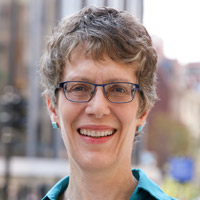 Following law school, she clerked for the Honorable Boyce F. Martin, Jr. of the U.S. Court of Appeals for the Sixth Circuit in Louisville, Ky.

At the completion of her judicial clerkship, Jerianne became associated with the law firm of Patton Boggs, L.L.P, in Washington, D.C., and later joined the Mass Media Bureau of the Federal Communications Commission (FCC). As a senior attorney advisor at the FCC, her work focused on regulation of the broadcast services, the development of wireless services to compete with cable television and the conducting of spectrum auctions. Jerianne left the FCC in 1999 to join NAB, where she has developed expertise in ownership regulation, retransmission consent and administrative law matters. She is currently a member of the Maryland and District of Columbia bars, the U.S. Supreme Court bar, the Federal Communications Bar Association and the American Bar Association.